skip to main | skip to sidebar

In Memory Of Damian Bisciglia 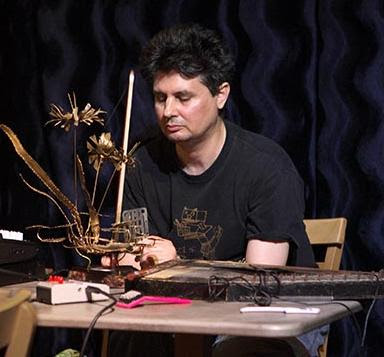 It was with great sadness that I awoke early this morning to this news from Eric Lanzillotta
"I am sad to report the death of Damian Bisciglia. He took his own life earlier this week. He was only 52 years old, but leaves behind a great legacy of work.
I first became aware of Damian in the 1980s when a friend wrote his name and number on a piece of paper for me. He mentioned Points of Friction and thought we should meet each other. At that time I did have the nerve to call people out of the blue. So it wasn't until several years later that I got in touch with Damian. I knew of his work as Agog and his visual art from the cover to Randy Greif's "Bacteria and Gravity" LP released by RRRecords. I think it was probably through Randy that I first heard Agog as I got the "Putting Legs on a Snake" cassette from him.
The music of Agog was homemade musique concrete - amazing tape collages. It was really outstanding work that stood above a lot of what was coming out of the cassette culture at that time. Damian's work was superbly recorded and edited, and lovingly packaged. The packaging in a way was his downfall as he spent so much effort on it, that he made few copies of the cassettes on his own Spagyric label. The only cassette that was easily available was a split cassette with Zan Hoffman published by N D magazine in 1990. He also did a cassette for the legendary Broken Flag label, but it was towards the end of their first run and very few copies seem to have been made of that either. Probably the most heard was the Agog track on the five 7" box set edition of RRRecords's "Testament" series. His own cassettes reached fewer and fewer people over the years as his packaging grew more and more elaborate. Visiting him at his parent's house in the late 1990s, I was blown away by the creature sculptures that he was showing me. My amazement increased as he split them open to show me the cassettes that lived inside of them.
With so little available and such high quality, I wanted to do what I could to share his music. It ended up being a three year project, but I was able to release the only Agog LP on Anomalous Records in 2001. By the end of that year I was able to reissue one of the Points of Friction cassettes on CD. Both were very special releases for me. They didn't sell particularly well, but represented what "anomalous" meant to me.
But I am failing to mention Damian's work as an improvisor. He was a collector of junk materials and built his own instruments and sculptures. At times he would put himself down for only having these non-instruments. Perhaps this contributed to his shyness towards performing. I only saw him perform in front of an audience once. That was at Anomalous Records in 1994 in a duet with Joseph Hammer. Need I even say that it was amazing? His association with Joseph went all the way back the beginning of the 1980s when Points of Friction was formed with Kenny Ryman and Tim Alexander. After the group broke up, he worked mostly solo, but did collaborate through the post with Minoy, Adam Bohman, Johannes Bergmark, and Zan Hoffman. In recent years Mitchell Brown roused him to more activity helping encourage the reformation of Points of Friction and releasing a new CD of their music.
Damian's music and art remains little heard and known for the most part. I congratulate Mitchell Brown, Fredrik Nilsen, Dylan Nyoukis, Seymour Glass, Hitomo Arimoto, Ron Lessard, Eric Blevins, Zan Hoffman, Daniel Plunkett, and the others that helped get bits of his music into the world. I hope that his music does not disappear with his passing.
Earlier this year, Points of Friction played for the first time in a few years. Damian was excited about the event and excited about music in general. I got the impression that he was ramping up for more activity. Obviously there were other things that troubled him though. His life has sadly been cut short. I am thankfully for all that he gave us and will miss him.
Thank you Mitch for passing along this sad news. Thank you Nils for first pointing me in Damian's direction all those decades ago. Thank you Randy for helping me pick up that thread. Thank you Joseph for all you did." - Eric Lanzillotta

I never had the pleasure to meet Damian in person, but at some point in the 90s we made contact through the post. Traded tapes, collaborated, and I had the pleasure to interview him for Bananafish magazine. A couple of times in more recent years we tried to convince him to come play Colour Out Of Space but he respectfully declined, couldn't face the flight. My thoughts are with all his friends and loved ones.

here's a postal collaboration piece we did sometime in the late 90s.

Here is a link to first part of Points of Friction performance from earlier this year:

Heard the news yesterday from Rick Potts. It's terrible:(

I just heard of the passing of my first cousin Damian. We were the same age, graduating the same year from high school, yet many geographic miles apart. I spent several days with Damian immediately after high school and saw what a great natural artistic talent he had. It deeply saddens me to learn of his passing.
I regret not staying in touch with Damian over the years, yet remember vividly how he introduced me to Johnny Rotten, Sid Vicious, The Pork Dukes, and The Ramones to name a few.
Damian evolved from that genre and kept going. It is obvious he touched many lives in a positive way. He will be greatly missed.
My deepest condolences go out to my Aunt, Uncle, my two cousins, and all of the rest of our family for OUR loss, as well as Damian's friends and extended family and their (your) loss.
Damian, you are in many peoples hearts, now and forever.
Love, your cousin Jamie...

I posted my own tribute to Damian here:
http://bergmark.org/damian.html#.UNoDS5Pm43k

I'm certainly very happy to read this blog site posts which carries plenty of helpful data, thanks for providing such information.
Piracetam @ peaknootropics

I have known with Damian for years and he was a creative genius and a wonderful friend. He was amazing to play music with and his skills and aesthetics were almost otherworldly. Another irreplaceable special person. Listen to his Agog tapes. Amazing. David Arshawsky